From Lockwiki
(Redirected from Pick)
Jump to: navigation, search 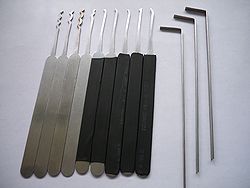 A standard set of pin-tumbler lockpicks and tension tools.

A lockpick (or pick, pick lock) is a tool used in lockpicking to manipulate components to their proper positions. The type of lock being picked and the preferences of the lockpicker will determine which type and style of lockpick used. In most cases, a tension tool is used with the pick to successfully pick the lock. Picks that are specifically designed for rake picking techniques as known as rakes.

The possession of lockpicks is considered illegal in some parts of the world. Lockpicks are categorized as "burglary tools" in many places, but most laws do not consider them such until they are used with the intent to commit a crime.

Pin-tumbler picks are typically flat, thin pieces of metal. The tip of the pick comes in various shapes designed to facilitate movement and feedback in the lock. Common handle materials are metal, heat shrink tubing, plastic, rubber, and wood.

Dimple picks use small, "flag" style picks that are rotated rather than raised. These are smaller than pin-tumbler picks and come in a variety of designs. Dimple rakes are also common. Traditional pin-tumbler picks can also be used to pick dimple locks.

Disc-detainer picks typically use a 2-in-1 Hobbs style pick which provides independent torsion and manipulation controls. Some, such as the Ford Tibbe 6 disc lock have dedicated picks which allow manipulation and tension of each disc via a system of telescoped tubes.

Lever picks came first in the form of bent pieces of wire as well as the traditional jigglers and skeleton keys, the latter of which were a hold-over from picks for warded lever locks. For the more advanced multi-lever locks, 2-in-1 Hobbs style picks were invented and refined, and are still common for non-curtained locks. Other methods include try-out keys, pin & cam systems and various means to read the lever number via the keyhole or, occasionally, elsewhere, via systems such as plasticine reader keys, rotational measurement devices and, especially for detainer lever locks, a steerable fibrescope which can optically decode the gate positions.

The simplest pick for a tubular lock is a tensioner and a straight piece of wire. Picking proceeds as with other lock types. More commonly, a dedicated pick is used, which has a wire for each pin arranged to match the 7, 8 etc. pins as well as a method for tensioning the lock. These are normally used to self-impression the lock, meaning that the tool will use the binding order of the lock to recreate the correct key without prior knowledge, and can be startlingly effective against locks that have no countermeasures to them. Against those with countermeasures, a dedicated pick such as the Peterson Pro1 is normally required which will allow each pick wire to be adjusted individually by hand.

Wafer locks share picking tools with pin-tumbler locks but also have their own variety of picks which include wavy, smooth designs. Wafer picks are often marketed as "jigglers" due to the heavy emphasis on raking techniques to open these locks.

Picks for warded locks can consist of bent wires, but more commonly they consist of simplified keys, known as skeleton keys. A set of keys can be simplified to create one or two keys that will open the entire range of that type of warded lock, be it a warded single lever mortice lock or a warded padlock.

Some notable and favored lock pick manufacturers and designers are...