The ABUS Plus 88/50 is a rotating disc-detainer padlock made by ABUS. The inner cylinder uses seven code discs and two “butterfly” discs (or a butterfly and a #6 disc) that interact with a sidebar. There are thin “spacer” washers in between each disc.

The ABUS Plus works by using angled bitting cuts on the key to rotate discs. The key is inserted and rotated 90°; the angled cuts on the key in rotate the discs in the lock. When all the discs are rotated to the correct position, the sidebar falls into the true gates and the plug can be rotated. Washers are placed between discs to ensure that the key rotates each disc individually. There are six positions available for discs, at 18° increments between 0° and 90°. The discs are numbered 1 – 6, with corresponding cuts on the key. The 1-cut is the deepest cut and does not rotate the disc. The 6-cut leaves the key uncut, and the #6 disc rotates the plug once the sidebar retracts. False gates are included on the discs with the intention of increasing the difficulty of lockpicking and decoding.

In order to disassemble this padlock, begin by unlocking cylinder and lifting the shackle, and removing the screw beneath it. Carefully remove the small steel balls under the screw. Then the collar in front of the lock cylinder can be unscrewed and the cylinder removed. The actuator behind the cylinder and the ball bearings can be removed, as well. 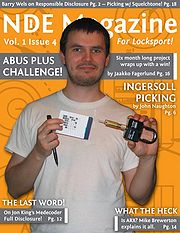 On July 5, 2007, a report was published with the details of a decoding attack on the ABUS Plus. [1] Jaakko Fagerlund had noticed, the day before, that the number stamped on the back of a code disk could be “read” by taking an impression of it with Blu-Tack adhesive putty. The putty was placed on the L-shaped tip of a rod, which was lowered into the keyway and behind a disc, turning the disc below it 90 degrees to uncover the number. When the tool was removed, the impression of the stamped number could be read. Once all the discs had been read, the lock was decoded and could be manipulated open or a key could be made.

When Fagerlund expressed a desire to inform ABUS of vulnerability, Michael Huebler wrote to ABUS on his behalf. The immediate reply from ABUS customer service did not give them much hope that the matter would be addressed. After five months had passed with no follow-up from ABUS, Fagerlund sent a message to Gerhard Meckbach, the Product and Purchasing Director at ABUS on November 29, 2007. A reply came on December 10 in which Meckbach offered to send Fagerlund a free ABUS Plus padlock, without the keys or keycard. If he could correctly decode the lock, ABUS would then send him the keys. This ABUS Granit 37/55 padlock contained a mix of old and new discs, the new ones no longer displaying a stamped number. ABUS had discontinued the practice of stamping the discs and there were no longer any disc markings. [2]