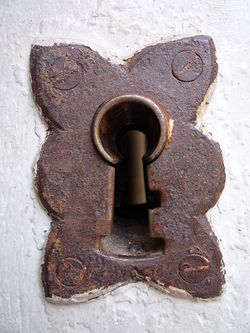 The keyhole to an older style warded lock. Note the lack of internal components.

A Warded lock (or ward lock) lock is a lock design that uses obstructions (called wards) on or inside the keyway to prevent incorrect keys from being inserted and rotated in the lock. Warded locks have no active components other than a spring or lever that is used to actuate the locking bolt when the correct key is used. Warded locks are one of the oldest lock designs, but because of their inability to resist manipulation and impressioning they are considered low-security by modern standards.

Warded may also refer to the warding pattern on the keys or keyway of other lock designs.

Warded locks are one of the oldest lock designs, with roots in ancient Roman and Chinese cultures. They were widely used until more secure lever designs began to replace them in the 1700s and 1800s. In modern day, warded locks are commonly used as low-security padlocks in outdoor settings.

Warding on the keyway of the lock attempts to prevent incorrect keys from being inserted. Once inserted, a second set of warding interfaces with the bitting of the key to prevent the lock from rotating. Once the key has been rotated fully a spring or lever actuates the locking bolt and locks or unlocks the lock.

Warded locks are extremely popular in outdoor and extreme climate settings because the lack of moving parts gives them extended longevity and resistance to elemental damage.

Warded locks are considered low-security by modern standards because they provide no security against lockpicking or impressioning attacks. Because modern applications of warded locks are low-security padlocks they are also commonly susceptible to bypass and destructive entry.

The use of skeleton keys is a popular attack against warded locks. Skeleton keys are created by removing all material from the key bitting except what is necessary to actuate the locking bolt. The skeleton key can be used in any lock that puts the locking spring/lever in the same position. Due to mass production, some skeleton keys can be used against hundreds or thousands of locks in use.