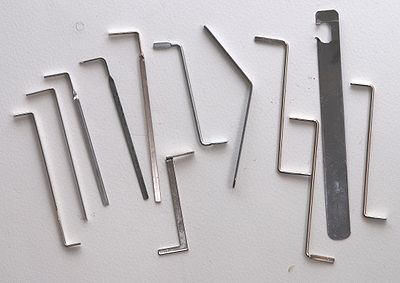 A variety of pin-tumbler torsion tools.

Torsion (or torque, tension) is a fundamental lockpicking principle that allows a lock to be compromised by exploiting tolerance errors and binding to defeat each locking component individually. A tool is used to apply torsion to the lock while a pick properly positions internal components. Once all components are positioned correctly the torsion tool may be used to actuate the locking bolt.

Torsion tools are commonly referred to as tension/torsion bars, tension/torsion wrenches, or torque wrenches. The term tension is a misnomer since most lockpicking techniques require torsion; rotating lock components until they bind. Both terms are used but torsion is usually more correct.

The design of torsion tools varies widely, but they are most commonly associated with the L shaped pin-tumbler torsion tool. Like picking tools, most torsion tools leave forensic evidence in the lock. 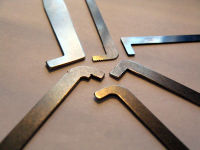 In pin-tumbler, wafer, dimple, and axial locks, torsion is applied to the plug of the lock by inserting the torsion tool into the keyway.

The most common torsion tools are L (bent) or Z (flat) shapes. Curves, serrations, and other modifications to the tip of the tool help to prevent slippage and enhance feedback.

Both work by being inserted into the top or the bottom of the keyway and supplying light torque. When using these tools, many lockpickers will place their finger or thumb on the plug to increase feedback when pins are set.

Hands-free tools attach themselves to the lock, but are not as popular because they provide little to no feedback.

In lever locks, a tool is inserted through the keyway and torsion is applied directly to the bolt. Lever torsion tools often resemble the tip of a lever key.

In combination locks, particularly padlocks, tension is applied to the wheels or discs by pulling or pushing on the shackle itself. This is one of the few examples of tension being the correct term to use (as opposed to torsion).