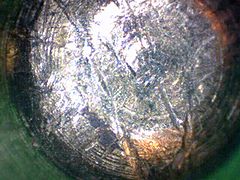 Forensic evidence left on a pin-tumbler by lockpicking tools.

Art Paholke of the Chicago Police Department is considered the father of forensic locksmithing. In the 1970s, working in the crime lab, he researched various methods of attack against locks, safes, and keys. He would look at each attack to determine what it changed and what evidence it could provide. He also examined the ways in which wear of the cylinder affects marks left by various attacks. Many modern techniques and procedures used by forensic locksmiths are credited to the research and innovations of Mr. Paholke.

All destructive and covert methods of entry leave some form of forensic evidence. The latter leaves evidence that is not normally detected by normal users but can be discovered by a trained forensic locksmith. Attempts to conceal evidence from both types of entry methods is usually done through repair or replacement of affected components. This in itself may leave forensic evidence, as well.

Lockpicking
Scratches along the pin-tumblers, plug walls, and actuator are common. It is extremely difficult to pick a lock with traditional tools without leaving any scratches. See Anti forensics below.

Key bumping and Pick guns
Impact marks along the base of the tumblers are present, as well as marks on the plug walls and pin chambers. Each type of impact leaves a different tool mark, including a distinction between manual and electric pick guns. With key bumping, distortion to the keyway caused by the shoulder and bow of the key may also be present.

Decoding
Varied evidence is left by decoding depending on the tools and techniques used. Common "pick" decoders leave evidence similar to traditional lockpicking attacks. Many forms of decoding are also surreptitious.

The use of non-steel lockpicks is a common idea. Plastic, rubber, or similar materials would, in theory, not leave marks on the brass or nickel-silver components of most locks. The overriding problem with these tools is that they are hard to make, and extremely hard to use.[2] Most are weak and provide little feedback during lockpicking.

The shoulder of a key can be replaced with one made of soft rubber, such as a glue gun stick. This mitigates damage done to the face of the lock but does not prevent forensic evidence on the pin-tumblers, pin chambers, or plug walls.