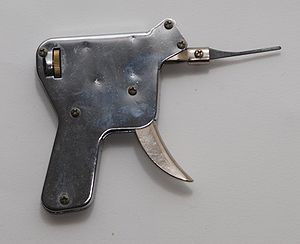 A pick gun (or snapper pick, snap gun, vibration pick, electric pick) is a lockpicking tool used to rapidly open pin-tumbler based locks. Pick guns are manual or electric, and are a common tool for locksmiths. The use of pick guns is classified as covert entry because they leave distinct forensic evidence. Pick guns are similar in function to bump keys.

The pick gun needle is inserted into the keyway below the bottom pins and a tension tool is used to apply light tension to the plug. The trigger of the gun is fired, causing the needle to impact all pin stacks simultaneously. The kinetic energy travels to the top pins, causing them to jump. If all top pins jump above the shear-line, the plug will be free to rotate. Pick guns often require several attempts to pick the lock, but are effective against most low to mid security pin-tumbler locks. 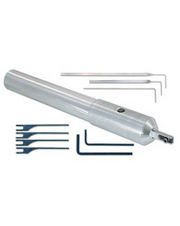 Electric pick guns use a motor or electromagnet to continuously oscillate the needle. The needle is placed under all pins and vibrates, hoping to vibrate at a resonating frequency that will cause all top pins to jump above the shear line, allowing the plug to turn. The resonating frequency is an important feature in electric pick guns, but few actually allow this to be controlled directly. Most products advise the user to turn the tool off and on repeatedly to vary the motor speed.

Electric pick guns leave a much greater amount of forensic evidence than manual pick guns because of their constant movement when inside the lock.

Due to the high cost of electric pick guns, many low-cost homemade alternatives exist. Most modify a device to include the use of a needle on an existing motor or electromagnet. Products include electric toothbrushes, scissors, and screwdrivers.