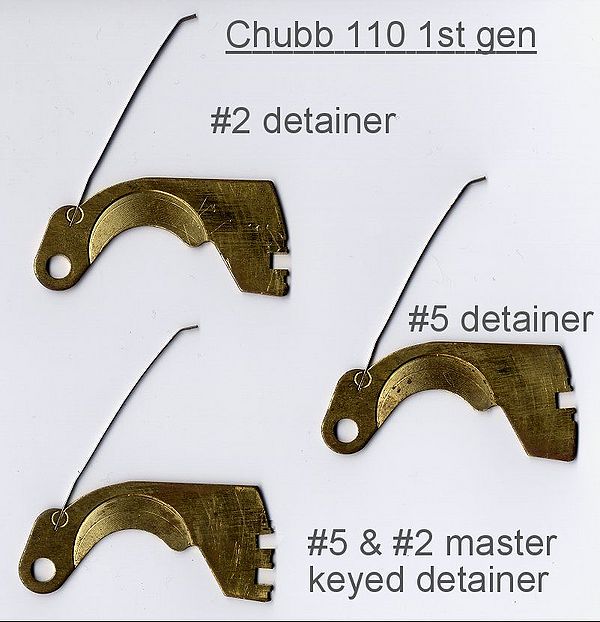 Most levers in common use have a H shaped gate completely contained within the lever pocket. Thus it is impossible to see the position of the gates from outside without penetration of the outer shell or at least the door.

"Detainer" levers however have a cut notch on the front edge. Operation is such that the key lifts the lever to the correct height for a mechanism to test the detainer positions, then resets. This requires a marked increase in complexity so is only found in higher end locks such as the successful high security Chubb 110 series.

(Note that on some newer UK domestic lever locks, the end of the lever is open for the bolt to slide though. They have only half of the H inside the lever, and look somewhat like a detainer, but they are not true detainers as they are not tested but directly interact with the stump. The reason for this change is due to the increase of the locking bolt length requirement in BS3621:2003 and manufacturers needed to increase the bolt travel without changing the key size.)

The detainer allows mechanical advantage to amplify the variations of the key in the 110 series, and this allows for 9 cuts to the key, symmetric about the middle 5th cut, interacting with the 5 detainers, to have 9 different lifts with no MACS restrictions. Further, because the mechanism checks the detainer for a notch at the correct height, it is possible to have a detainer with, for example, a notch at the 3rd cut lift height and the 6th cut height which will still prevent a key with a 4th or 5th cut from working, unlike a common lever lock.