The 55230 is a pin-tumbler padlock made by Sesamee. It is similar in many ways to the American 1100 series locks. It contains five or six pin chambers and uses various security pin designs for both key and driver pins. Spool security pins are often present in 55230 padlocks.

The 55230 series padlock is a standard pin-tumbler lock with six pin chambers, but only five are typically used. The key pins come in standard and serrated deisgns. The first key pin is often a steel anti-drill pin. Driver pins come as either standard pins or Spool pins. The plug also comes with a single serration at the top of all six chambers.

When all of the pins are lifted to the shear line the plug can rotate clockwise. The 55230 can be configured as a key retaining padlock; when opened the key cannot be removed until the shackle and cylinder are returned to the locked position. Certain packages of this lock contain a small pin that allows it to be configured as key retaining. 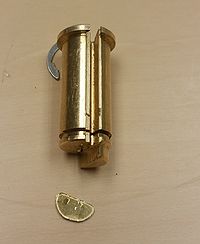 Bypass restriction plate in the 55230.

In the 55230, a bypass restriction plate is present. Similarly to the American padlocks, it prevents the manipulation of the actuator cam with a special tool through the keyway. However, the plate takes the form of a semicircular brass disc that fits within the plug itself.

Unlock the padlock and swivel the shackle out of the way, revealing the cylinder retaining screw. Remove this screw, which will release the trap plate at the bottom of the lock and permit the cylinder to be removed.

To further disassemble the padlock: with the retaining screw, trap plate, retaining nut and cylinder removed; carefully lock the padlock while keeping the shackle depressed. Unless the lock is dirty inside, this will generally cause the actuator and ball bearings to drop out the bottom of the lock. If they don't drop out immediately, gently tap the lock against a hard surface to dislodge the parts. Then, remove the shackle and shackle spring. The core can be disassembled as follows:

Note: A half-moon shaped follower end is recommended for this procedure.

Reassembly is done in reverse order: After cleaning the disassembled padlock, insert the shackle spring and shackle. Invert the padlock while holding the shackle in place, and insert the locking balls with some grease, followed by the actuator. Next install the cylinder, trap door and nut. Before installing the retaining screw, test the padlock by holding the trap door and nut in place (the nut is necessary to allow proper cylinder operation) by locking and unlocking the padlock several times. When you are confident the lock is operating correctly, install the retaining screw.