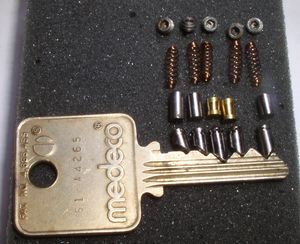 A pin-tumbler is a cylinder based lock design that uses movable pins to prevent rotation of the plug. A key is used to properly elevate pins to allow the plug to rotate and the locking bolt to be retracted.

The pin-tumbler is currently one of the most widely used lock designs in the world. Minor changes to the positions of pin-tumbler components are the basis for dimple and axial/tubular lock designs.

Pin-tumbler locks were originally invented in ancient Egypt. The design used a series of single pins that, when locked, would prevent movement of a bolt by resting inside the bolt itself. The key was used to raise pins out of the bolt, allowing it to retract. This was the first use of a shear line, a major discovery that is the basis for all cylinder based locks in modern use. Early pin tumbler locks, bolts, and keys were all made with wood, but eventually brass and iron were used. Many cultures adopted the design throughout history, but it would not be widely used until Linus Yale Sr. and Linus Yale, Jr. modified the pin-tumbler design in the mid 1800s.

Linus Yale Sr. improved the Egyptian design with the idea of pin pairs. In the original lock pins were required to be raised high enough to clear the bolt, but were not checked to make sure they weren't raised higher than necessary. The addition of a second pin in each chamber allowed for positive locking when components were raised too high. In this design, the key had to properly raise the pin pairs so that they could separate at the shear line, allowing the locking bolt to be retracted. Yale Sr. also added springs above the pin pairs to force them down to their locked position when no key is inserted.

The design of the pin-tumbler lock has remained virtually unchanged since the Yale family's contributions. Master keying allows the addition of pins in each chamber to provide various methods of keying a particular lock or group of locks. Other improvements have been in the form of auxiliary security mechanisms to prevent compromise. Security pins, sidebars, and side pins were created to frustrate lockpicking. Other anti-picking modifications exist, such as rotation or telescoping. Finally, ball bearings and hardened steel rods or discs are now inserted into the plug or cylinder to protect the pin stacks against destructive entry.

Pin tumblers are a series of pin stacks pushed down by a spring. Each stack must be properly raised to allow pins to separate at the shear-line. Once all pin stacks are separated the plug can freely rotate and actuate the locking bolt to lock or unlock the lock.

An incorrect key will not align all components correctly; rotation of the plug will be blocked at the shear-line.

Key pins (bottom pins)
The pins that are touched by the key. Key pins are sized differently corresponding to the different depth cuts on the key. When the correct key is inserted, all key pins are aligned at the shear line, allowing the plug to rotate.

Driver pins (top pins)
The pins placed between the key pins and the spings. In their resting position, the driver pins block rotation of the plug. In more advanced pin-tumblers, driver pins may be sized inverse to the key pins to defend against decoding and attacks via comb picks.

Springs
Springs placed above the pin stacks push pins down to the their resting position, ensuring that pins cannot be trapped above the shear line while the plug is in the default position.

Plug
The plug is the inner piece of the lock that rotates upon insertion and tension of the correct key. The plug is connected to the cam to actuate the bolt mechanism when rotated.

Cylinder
The cylinder is the outer piece of the lock that houses the upper pin chambers and the plug. Driver pins and springs are trapped in the cylinder's pin chambers when the correct key is used and plug rotated.

Cam
The cam is an extension connected to the back of the plug which actuates the bolt mechanism to lock or unlock the lock.