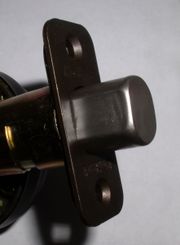 Mortised
A bolt that is installed within the door.